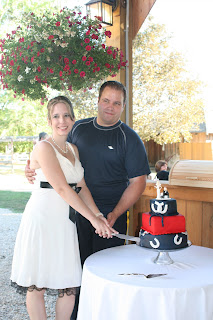 It's been a whole year since we got married. It was probably the hardest of our lives together, and I sincerely hope it's the one year we can look back on and say, "It was then...I knew we'd make it".

When despair overtook me, when my fear no longer allowed even tears to fall, you did what you always do; you put on a brave face, told me things would be fine, and you made me a million little promises that really did matter.

You took my hand in yours and promised to never let go.

We went to all his appointments together and you promised we would never stop fighting.

There has never been a man greater than you. This year together has proved it.

I love you husband.

I have always wished to be one of those people that could see and speak with dead. I mean how cool would that be? If I could pick a super power that would totally be it. To walk in this world with one foot always in theirs...radical! I got really into "ghosting" for a while. Doing EVP's, visiting graveyards, catching orbs on camera etc. I caught a few unusual things but nothing that ensured that this interest would become a passion. So I moved on, had kids, became a wife, moved into a new house on an old military base...and started to see dead people.

I soon decided that seeing and speaking with the dead...not really as fun as I anticipated. Actually it's really more terrifying than anything else. So I stopped watching "Paranormal State, Ghost Hunters, etc" and started to ignore the flickering lights, the tv and computer turning on and off, the radio randomly blasting, and anything anomalous I caught in photos of my kids.

With no attention paid to the ghostly visitors I stopped having ghostly visitors...for the most part. And I know what you are thinking...that the things I have just described can be easily explained away...it's true...but I haven't told you everything.

There was the shadow of a large man, so dark it seemed to eat the light, staring at me on my back porch who then walked through four solid objects. Or the apparition who pretended to be Scott, who I thought WAS Scott until a conversation later that night revealed the truth - twas NOT Scott.

and now the most recent events...

Some one whispered "chicken" in my ear...I suppose because I am too chicken to commune with them and on a separate occasion also whispered "Chris" at me; naturally I assume this is the person's name. And I'm certain he lives in our guestroom. Our guest room, previously our daughter's, is often 10-20 degrees colder even with the heat at full blast. It smells like cigarettes and I can't get into the room, the door won't open! unless I knock and ask to be allowed in. I poop you not!

but I'm really wishing I didn't.
Posted by carrie at 2:35 PM No comments:

"Take him and get him weighed, Please", I command my husband. He seems too little. I refuse to panic. Preston has always been smaller than the average child. He went three weeks without gaining any weight at all, and then months where a diuretic ensured that he never carried any water weight. I naturally assumed he would bulk up the longer he was off the Lasics. He hasn't. When he started to eat solids, I told myself, surely now he'll gain weight, he'll start to put on baby fat. He hasn't.

"Take him and get him weighed, Please", I demand again as Scott heads to the walk in clinic. The antibiotics Preston was put on has caused a rash. Is it an allergy? Perhaps. In any case, I reiterate once more, please, get him weighed.

Scott returns home, Preston settled on his hip. I smile at my baby and look at him expectantly.

"Well?"
"Do you want the good news or the bad news?" he asks and I get the sudden urge to disable him with a quick, sharp kick to his shin. I play along anyway.
"Good".
"His ear infection has cleared up!"
"And the bad"? I inquire.
"He's allergic to amoxicillin."
"Crap...And how much does he weigh?"
"17lbs 11 oz"

I do the math in my head and I know it's off. I hand the baby over to him and rush upstairs to his baby book. The last time he was weighed and I had recorded it was two months ago at his last cardiology appointment. He weighed 15lbs 10 oz. Hes only gained two pounds in two months.

"Shit, shit, shit" I think to myself. The doctors told me he was in the 25th percentile for weight that day; that fateful day we got the news no surgery would ever be needed, that he was doing great!

My nimble fingers type 'baby percentiles' into google. I pull up a growth chart and discover his weight is at the 9th percentile now. I choke. I bite back the bile I hadn't tasted in months and that disgusting, slimy feeling of panic begins to settle in once more. My heart pounds in my ears, my mouth goes dry, I stumble down the stairs to Scott where I find him relaxed and smiling at little Puck. The minute his eyes meet mine I can see he's already determined that the news I have to share isn't good. He reaches for Preston and subconsciously clings to the baby who just yesterday had given us so much joy.

"It's not good. He's dropped to the 9th percentile for weight"
"Shit" Scott states, his words eerily matching my own.

In desperation I turn to the women who know this path intimately. "Heart moms". It's a club I haven't been fully adopted into, or so my own guilt tells me. Preston's miraculous gift; the news that he would never need surgery ousts me from the support group I had once leaned so heavily upon. How can I request help and ask for advice from the mother's who have walked that insidious path of open heart surgery? They rejoiced with me when my news was happy. They no doubt had hoped the same for their kids once upon a time. But I'm that mother now. The one who gets to step outside the confines of the diagnosis.

I'm a mom whose escaped the heavy fear that surgery brings with it and consequently, it's not as easy to step back into that club when his heart never needed a surgeons scalpel. Still, I know my own feelings don't matter; Preston's health does. So I request Michelle's advice once more and she happily gives it. And as much as I feel like an impostor in their world, they embrace me none the less, and I am grateful.

I admit that being Puck's mom is sometimes a struggle. And so I do my best not to buckle under the weight of it all; because despite his dimunitive size...sometimes he feels so heavy.

And then miracle of miracles, yet again, I discover he has not tumbled outside of his percentile after all, and in fact that the doctor misinformed, or I misunderstood, the "25th percentile" information. Preston has remained steady in the 10th percentile for his age for as long as his weight has been recorded.

And it's moments like these I find myself ever stronger. And I realize that as a heavy as he can seem, he's still my son, and I will carry him as long as I need to.
Posted by carrie at 3:24 PM No comments:

Reach for the stars

So here I am, age 28...and I am a mother. A pretty good mother if I have to say so myself. But I'm not the greatest role model. I swear, and occasionally lose my temper, I eat too much sugar and burp at the dinner table. My kids adore me of course, because they don't know any better, and I adore them because they are new, and beautiful, and so impressionable, and of course because they are my kids. But I want to leave more of a mark on them then just a few bad habits and a wealth of advice I myself never followed before having kids of my own. I want more than good health, and happiness for them, I want them to always reach for the stars. Right now they are of the age where the belief in Santa Claus, and Transformers, Boogie Monsters, and Princesses define their world and assure them that anything is possible. One day though, they will reach a point in their life where they will have to define reality for themselves, and decide what is possible and what isn't.

Ten years ago I decided as I graduated high school that writing was a dream that would never come to fruition. I was full of self doubt and terror when contemplating the world as a broke novelist. So I shelved that dream as just that - a dream and never attempted to really put pen to paper - until now.

So I type with one hand, while reaching for the stars with the other and I dust off that dream I shelved so very long ago...