The monitors spoke and brightened the room,
his breathing was laboured and fast
I wanted to cry but no tears would fall,
my hopes for his future had past.
My foot didn’t tap; my hands were not wrung
my eyes wouldn’t study his face
His body lay still and mine mimicked his,
I longed not to be in this place.

The doctors poured in and spoke over my head,
they whispered in hushed knowing tones.
Though I was still I was screaming inside
but all that came out was a moan
the tools that they used; the ultrasound wand,
confirmed what they already knew.
My son was born with holes in his heart,
How many? They hadn’t a clue.

One by one they left me alone
the door hissed as it closed,
the shaking began, would I be sick?
I slowly redressed him in clothes
I phoned his dear dad to give him the news,
the axe that I swung cut him deep,
I chopped up our life and hung up the phone,
Death was so close, would he reap?
We headed on home to a future unknown
Milestones were newly defined
Smiles and firsts and all those sweet steps
were just not enough without time.
To live in the present, within a moment
a second, a minute, an hour
That is the gift that God gave to me
Loves miraculous power.
Posted by carrie at 5:00 PM 4 comments:

My newest post on my house being a disaster!! Check out the new blog and follow me there! :D

http://trulywrittenramblings.wordpress.com/2012/08/15/unexpected-visitor/
Posted by carrie at 4:11 PM No comments:

I am enjoying my new space

I am enjoying my new blog platform more and more and think it might be time to retire this blog. I will keep it up and maintained because of all the history here that may help others, but it's time I start new! So check out my new blog peeps and follow me there if you choose!

http://trulywrittenramblings.wordpress.com
Posted by carrie at 11:24 AM 2 comments:

Well I started a new blog but I'm not sure if I will switch over completely yet. I am trying it out, trying to get a feel for it. Here's my first post at my writings new home.

What do you think? Do you like the new look? The cleaner feel? Or should I stay here at blogspot?

Perhaps I will use the new blog for metaphysical ramblings! I don't know. Advice please!
Posted by carrie at 1:21 PM No comments: 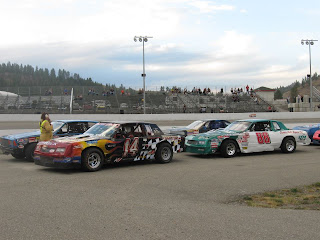 He was in the pits watching the race unfold before him. The sounds of engines roaring and tires squealing filled him with adrenaline. They’d worked hard this year to get the car running smoothly and his role of crew chief was drawing to an end.  The smell of diesel and dirt might seem overpowering to some but he loved it. He took a deep breath, inhaling the familiar and soothing aroma. He started to feel a little ill, sweat speckled his forehead and he thought perhaps he had eaten something which hadn’t agreed with him. Then there was pain; an explosion in his chest and throbbing in his left arm. Gasping for breath and maybe mercy he stumbled towards his pit crew. His eyes rolled up inside his head and he collapsed, his body met the heated, dirty asphalt and sirens rang out in the distance.

Billy Sr. was rushed to the hospital barely clinging to life. Although he had managed to survive the heart attack, he had slipped into a coma. The community of racers at PGARA Speedway were devastated.

My brothers and I had never met the infamous Billy Sr. Over the next few days we heard plenty of stories as people reminisced and drank and hoped that maybe God might see fit to spare his life. I felt for my family of course. They had been close to Billy Sr. and he was a good man – one who deserved to know his future grandchildren, one who deserved to live. My family was hurting and for my part I could do nothing to ease their pain, nor even share in it, at most I could give my sympathy and prepare to give condolences.

A few nights after Billy's heart attack he came to visit our family. At first I had no idea what my mother meant. He was in coma after all. How could he visit my brother who slept across the hall from me? Apparently even at death’s door Billy Sr. could not be dissuaded from putting others at ease, indeed from being a good guy.

My brother said he dreamed about a conversation with a man who was in a bright and beautiful room. He looked calm and happy. My brother went on to describe the man in great detail right down to the stubble on his face. My mother pulled out the racing team’s photo (over fifteen different men) and asked Greg to identify the man he had spoken with. Without hesitation my brother identified Billy Sr.

My mother was astonished but she managed to ask, “What did he say?”

Greg glanced up and said, “He told me he was in God’s waiting room, but he’d be home soon”.

That night Billy was taken off life support; he passed away silently. But his message to my brother has lived on and although he is missed, he is no longer mourned.

For he is Home.

When I met my mother-in-law I went in expecting to meet Mrs. Cleaver as this is EXACTLY how my husband described her. It turns out my mother-in-law may be more like Marie Barone than June Cleaver. She's head strong, stubborn, and autocratic. I wasn't sure what to say or do; how to act or react around her. I mostly tried to do my best to avoid her while not inhibiting her from seeing her grand kids or Scott.We struck a silent and uneasy agreement; one that would not last long as it would turn out.

Diane has always been a woman who intimidated me. There's just no getting around it. She carries an aura about her. She's kind but can be quick to judgement; sweet but vicious if necessary. To be fair I can come off as snobby or superior because of how quiet and reserved I am. I can appear emotionless and cold as my skills at social interaction are severely lacking. I’m weird. In truth, we are polar opposites and connecting was nearly, if not, completely impossible.

And then something changed. Preston was born with his heart defect and everyone suffered. Every person who loved him bore a weight of dread that you could never know unless you shared the same experience. It equalized us. I kept family up to date with my blog which now enabled Diane a peek at my innermost thoughts and our relationship began to evolve.

Preston got better and things got back to “normal”. Health was now good, I felt free. Then last month I suffered greatly at the hands of an unfortunate condition and the house fell into disarray. I kept the kids intact, alive, fed and bathed but that was all I could do. At the height of my pain I literally sobbed in the bathtub and begged God for death.

Three doctors saw me but kept sending me home while only increasing my medication. I phoned my own mother in desperation knowing she was on vacation and might be able to assist me. I needed compassion and companionship, but my mother couldn’t make it. I was lost. Finally a doctor treated my problem and slowly I have been on the mend. But the surgery left me wholly unable to care for my kids or the house.

My husband phoned Diane. I was done. I was in so much pain I didn’t care how horrid my house looked when she came, or how dishevelled the kids were. I needed help, and so it was time to eat crow.

People say thing happen for a reason. In the beginning I couldn’t imagine what that might be. Now I get it. You see I’m not good at asking anyone for help. I’d usually prefer to suffer silently, excruciatingly rather than whisper those four little letters out loud. I swallowed my pride and I allowed Diane not only to care for me but also my house and kids.

I can never express to you how much I appreciated your help, indeed how much I truly needed it. The kindness you showed me in this brutal experience has been a life preserver.

My Grumpy Gramps was born in South Shields, England and lived through the horrors ofWW2. He was a great storyteller and his escapades as a Merchant Navy man were thrilling. During my college years I moved in with him and although living together would prove to be more difficult than I had foreseen he never gave up on my brooding form. One night he called to me.
“Carrie, Pet, come here and have a drink with me”.

I threw open the door of my room and stared down the length of the trailer to see him standing with a bottle of whiskey and a two litre of Ginger ale. Now we’re talking old man, I thought to myself.

He poured me a finger full of whiskey and topped it off with the pale pop and I remember being insulted. Surely I could handle more alcohol then that. I drank anyway.

“Good?” He inquired. I nodded my head.

“You spend too much time in that room, girl; you can come out occasionally and we could chat”.

“I know Grandpa” I said non-committedly.

“Did I ever tell you that I used to send money back to my mother; a big chunk of what the Navy paid me I sent back to her. She needed it. And that’s what we did back then. We took care of family.”

I mumbled something about how nice that was and greedily gulped the Whiskey. I was about to thank him for the drink and head back to my room when I glanced up from my glass. There were tears rolling down his cheeks and I was flabbergasted. I’d never seen him cry. I reached for his hand and he drew back, wiping the tears away.

“She saved every pound I sent her. She never spent a nickel of it and she gave it all back to me upon my return. I miss my mum. I’m an old man and I still miss my mum.”

I swallowed hard and felt a little uncomfortable. I wasn’t sure how to console him.

“She was the greatest woman I ever knew. I hope your future kids will say the same about you”.

A long silence stretched out before us as we consumed another glass of Whiskey. I wondered what all of this was about. What was going on? My grandpa finally said, “I’m saving for you too, Carrie.”

I raised an eyebrow.

“The rent money you pay me. I’ve put it away for you, and when you’re ready, you can have it.”

I was stunned and before I knew it we were both crying. We drank together until the late hours of the night and I barfed the entire morning. Despite the alcohol poisoning and subsequent blackout his words have never left me. And while he knew one great woman, I can honestly say I knew an even greater man.